The balafon is a West African xylophone which dates back to the 13th century. Played with two sticks that have padded or rubber (sometimes made from the walls of car tires) heads, the balafon has sets of gourds beneath the tuned wooden keys which resonate with the earthy and festive sound of West African music. Balafons range in size and the larger ones are sometimes 'worn' using a shoulder strap. This allows the musician to play while standing and moving – movement and rhythm being essential elements to many forms of African music. Gandharva Loka usually has single and double octave balafons available. Examples of balafon playing can be viewed here and here.

The dulcetina (aka dulcitina harmonium) is a member of the harmonium family – it is a simplified, slimmer and more portable version of the harmonium. Dulcitina's do not have any registers to vary the tone but the dulcitina's advantage is its simplicity and light weight. Generally the dulcetina offers a sound that is quite powerful but not as rich in modulation as its larger cousin, the harmonium. Gandharva Loka offers Bina and DMS brand dulcitinas, harmoniums and shruti boxes. We also sometimes stock a type of dulcetine that includes the drone ellements of the shruti box.

A gentle stroke with the wooden striker is enough to produce from these energy chimes a pure, crystal clear tone which resonates for up to thirty seconds. The sound vibrations emitted by these energy chimes are rich in natural harmonics which are considered to be the healing elements of music. Gandharva Loka has energy chimes available with one, two, three and eight chime bars and each energy chime comes with a beater.

The glockenspiel is a very easy instrument to learn which makes it very popular with children and music teachers. Glockenspiels offer the opportunity to quickly become familiar with notes and play simple melodies. Even very little children are enthusiastic about the bell-like melodious tones and they don't hesitate to play as soon as they get a striker in their hands. Gandharva Loka stocks a wide range of glockenspiels made in a variety of styles and from a variety of materials such as metal, aluminium and wood – and these include colourful fun models for the children.

Harmoniums have keys like the piano and a bellows that is pumped with one hand. The sound is created by the air streaming through tuned metal reeds. Depending on the type of harmonium, there are registers for lower and higher pitch, for doubling the octaves, regulation of the volume, vibrato and various bordunes. Indian harmoniums have a practical size and a soft voluminous sound.

The kalimba family of instruments is uniquely African and appears to have been invented twice! A wood or bamboo-tined kalimba appeared on the west coast of Africa some 3,000 years ago, and metal-tined lamellophones appeared in the Zambezi River valley around 1,000 years ago. Also known as the thumb piano, the kalimba is held with both hands and metal tines are plucked using the thumbs. The kalimba offers mellow tones and the opportunity for interesting rhythms. Although they are a very simple instrument, kalimba differ greatly in shape and sound and can be tuned precisely by adjusting the sound bars.

Gandharva Loka stocks several models of the highly developed Kalimbas created by two inspired instrument makers, Hugh Tracy and Peter Hokema. (Peter lives in Germany and has created a highly refined version of the kalimba called the sansula.) Hugh Tracey started making and exporting Kalimbas in the early 1960s and from there the popularity of the kalimba grew. His kalimbas are made from African hardwood and the tines are made of European spring steel. We carry several models of the Hugh Tracy kalimbas from the flat kalimba to the box kalimba (with or without the little beads that give the authentic fuzzy sound found in African music) and in different tunings; the treble and celeste treble (17 notes, 2+ octaves), the alto and TM alto (15 notes, 2 octaves), 11 note pentatonic kalimba, the African-tuned karimba, and an 8-note beginners kalimba.

The melodica presents itself as an easy-to-play instrument for children and for adult beginners. It is a combination keyboard and wind instrument as the sound is produced by blowing into it while playing the keyboard. Melodica are made with either thirty-two or thirty-seven keys. They can be played by blowing directly into the mouthpiece, giving it a saxophone feel, or a tube can be fixed to the mouthpiece so that the instrument can be played from a table or stand. A robust case is provided with the instrument.

Peter Hokema's sansulas have a richer, more mellow and resonant sound than that of the traditional kalimba which they are based upon. The metal bars are produced precisely and are tuned to A minor with additional tunings in B and F. If you hold the sansula on your lap or over an even surface you can create intense effects like vibrato or wah-wah effect by lifting and lowering the instrument.

Sansulas are available in three models: Basic, Renaissance and Deluxe (click on the image to see all three models). The Basic and Renaissance models are covered with a natural looking synthetic skin which is resistant to climatic changes and is quite durable. The Renaissance is particularly durable because of the rounded 'wall' that protects the edges of the skin making it suitable in school and family settings. The Sansula Deluxe is the most robust model and perfect for heavy use and the playful hands of children. It has a natural skin that can be tuned with a small key. For all models the tuning is the same: A minor with additional notes.

This is a new instrument from Germany consisting of six metal plates. The inherent sound of the metal can be expressed perfectly with the special tuning technique of sen-plates. Each tone can sound soft or powerful according to the intensity and the way the plate is struck. A special timbre is created by the corresponding pairs of sound fields creating a subtle vibration of overtones. Available from Gandharva Loka in pentatonic tuning in C. 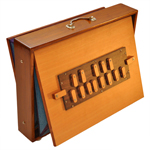 The shruti box is used to produce sustained sounds drone sounds. The construction style is the same as with the harmonium, but the inner space is smaller and thus much more practical. The range of notes is one octave.

In India the shruti box is an accompaniment in the traditional music; in the West it is mainly used as a drone for overtone singing or to accompany instruments and singers.

Steel drums (also known as steel pans or pans) is a musical instrument and a form of music originating from Trinidad in the West Indies. The steel drum is a pitched percussion instrument, toned chromatically (although some toy or novelty steel drums are tuned diatonically), and were originally made from fifty-five gallon oil drums. Gandharva Loka offers E.C.S. Steeldrums – a German company with over 30 years experience which we feel construcuts the best quality and variety of steel drums on the market. We stock the cheaper student models (including the PixiPan for childern from three to six years old) through to the professional models in a wide range of tunings – the sounds are amazing! All models come with stands and mallets.

Waterphones (also known as Ocean Harps) were originally invented and developed by Richard Waters, an American artist, sculptor, inventor and musician, who drew inspiration for the instrument from such instruments as the Tibetan water drum and the African kalimba. The waterphone is a type of atonal acoustic musical instrument consisting of a metal resonator bowl or pan with a central cylindrical neck and metal rods of different lengths and diameters attached around the rim of the bowl. The resonator bowl may contain a small amount of water giving the waterphone a vibrant ethereal sound.

Several sizes and design variants of waterphones exist. It is generally played in a seated position and either bowed, plucked or struck with movements to affect the water in the bowl. This creates the resonant characteristics of the bowl and rods in combination with the movement of the water. The sound of the waterphone is often used to evoke mystery and suspense and they are a wonderful instrument for creating authentic 'whale song' effects. An example of a waterphone being played (the type we offer at Gandharva Loka) can be viewed here.

Played with a bow:

Played with the fingers:

Played with a metal striker:

Played with a padded mallet:

Like the glockenspiel, the wooden xylophone is a very easy instrument to learn which makes it popular with children. It offers the chance to quickly become familiar with notes and play simple melodies. Even very little children are enthusiastic about the melodious tones and they don't hesitate to play as soon as they get a striker in their hands. We have a wide range of glockenspiels including fun models for the kids. Some have wheels and a pulley rope and we have a wonderful mini Thai xylophone which will keep a child amused for hours.

Can't Find What You're Looking For?