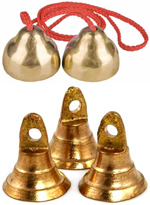 Bells are usually made of cast metal, but some small bells are also ceramic, glass or quartz crystal. Bells can be of all sizes: from tiny dress accessories and alter bells to church bells or specially commisioned bells that weigh many tons. (One of the most famous bells in the world is America's Liberty Bell but the world's largest bell is the Tsar Bell which weighs in at 102 tons!)

Historically, bells have served a wide number of purposes including alerting servants, warning of danger, gathering communities together, celebrating or commemorating important events and people, and religious, spiritual and inspirational purposes. Bells are also associated with the concepts of peace and freedom and the Botanical Gardens in Christchurch is home to New Zealand's only Peace Bell.

A variety of bells are available at Gandharva loka in Christchurch. We stock tiny alter or aroti bells with pure and resonant tone, small brass handbells, Tibetan temple bells and larger Chinese temple bells. Mostly handmade and most commonly made of brass, bells vary greatly in tone depending on their size, thickness and the composition of the metals they are made from.

Bells have a hundred-and-one uses including practicle purposes such as on shop counters, inspirational, devotional and religious uses – or just plain fun! Often decorated with ornate symbols of the country or culture that they come from, bells make wonderful and unique gifts. Gandharva Loka also offers colourful tuned hand bells for children.

Bell strings are sets of bells, usually in brass, of various shapes and sizes that are strung together on bright and colourful cords. Often decorated with items such as beads and shells, the number of bells used is dependent on the length of the cord and the discretion of the maker.

Offering a delightful tinkling sound, these bells are often hand-made and vary greatly in size and shape. Variations in the pitch of a string of bells does occur but this adds a joyful and random element to their musicality. 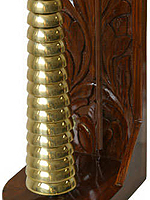 A Bell Tree is a percussive instrument consisting of vertically nested inverted metal bowls. The bowls are fixed to a vertical rod and are arranged inexactly in order of pitch. An effective ascending or descending glissando is accomplished by sliding a metal beater up or down the tree. When a glissando is played, the inexactness of the order of pitch is unnoticeable; the glissando just sounds fuller. Random or relatively pitched notes can also be played on a Bell Tree.

The number of bowls can vary but the Bell Trees that are currently available from Gandharva Loka (pictured) have eighteen bells and come with two wooden handled, metal tipped strikers. The two strikers allows for simultaneous ascending or descending glissando and also for the instrument to be played in a similar fashion to a glockenspiel or xylophone. The bells are housed in an ornately carved wooden frame.

Hanging Elephants come in various shapes and sizes. Bright and colourful, they are typically made of felt and decorated with such things as shells, beads and always with bells. They make wonderful gifts and are perfect decorations for the home, christmas trees or a child's nursury.

Tibetan temple bells are made of brass and have three main aspects: the ringing of the bell; the singing bowl aspect where a wooden stick is drawn around the rim of the bell to create the constant singing bowl tone; the dorje aspect where the bell is struck with a brass dorje (striker). An important part of Tibetan Buddhism, these temple bells are ornately decorated and everything about their design and purpose represents aspects of the sacred Path to enlightenment. 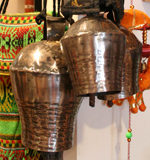 If you have ever been hiking in Tibet or Nepal, you have more than likely shared the narrow trails and passes with a mule or yak train at some stage. You may also have noticed that these stoic beasts of burden are often decorated with bright ribbons and bells. While these decorations have very practical purposes, the hardy mountain people also believe that the bright and haunting tones of these bells have the power to invoke good fortune as they journey through some of the most unforgiving terrain on the planet!

Gandharva Loka offers a range of genuine hand crafted Nepalese mule/yak bells that come complete with decorative ribbons to hang them by. They really sound fantastic...!

Jing cymbals are traditional Chinese cymbals that come in a variety of sizes from hand-held to stand mounted. Jing cymbals are handmade and this gives them an authentic Asian sound with more overtones than the classical Western cymbals. Traditionally the smaller paires of cymbals are held in each hand and struck together with the stand mounted cymbals being played with a striker. Many different effects are possible and you will appreciate the creative opportunities these delightful cymbals offer.

Tibetan temple cymbals (also known as tingsha, Tin Shas, temple chimes and hand cymbals) are small metal cymbals used in prayer and rituals by Tibetan Buddhist practitioners. The cymbals are joined together by a leather strap and, when struck together, they producing a crystal clear, high pitched ringing tone.

The Ban Gong (also known as the Opera Gong) produces a keynote that is sustained for a long time when it is struck lightly. It is similar to the Tiger Gong, but the Ban Gong has a characteristic upward or downward sound when it is struck with a small hard stick. When struck in this manner, it produces a low-pitched note that rises up to the keynote which then resonates for a while. Ban Gongs are an essential part of Chinese opera. A pair of gongs, the larger with a descending tone, the smaller with a rising tone, are used to identify the arrival onstage of particular characters, points of drama, consequence and humour. 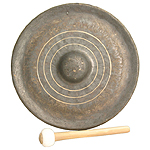 The Bao gong (often called a Temple Gong) is considered to be a sacred gong as it has been used in temples throughout China, Japan and many other Asian countries for centuries. What makes the Bao gong distinct is the central raised boss that is often made of a different metal to the rest of the gong.

Boa gongs have two distinct sounds depending on whether they are struck on the boss or next to it. They have a clear, resonant tone but do not produce the rich overtones and shimmer that is available in gongs such as chao or wind. The metal of a Bao is thicker than that of a wind gong and, like a chao gong, they have a lip around the edge of the gong. Bao gongs are tuned to various pitches and come in a wide variety of sizes ranging from very small to massive.

Beaters and Mallets for Gongs 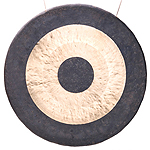 The Chao gong is a traditional percussion instrument from China that, along with the Wind Gong, has become quite well known in the West. They range in size from approximately 15cm to 180cm. The chao gong is made of electrolytic copper and tin. It is almost flat except for the rim, which is turned up to make a shallow cylinder – the main surface being subtly concave. The centre spot and the rim of a chao gong is left coated on both sides with the black copper oxide that forms during the manufacture of the gong, the rest of the gong is polished to remove this coating.

The earliest Chou gong known to exist was discovered in a tomb at the Guixian site in the Guangxi Zhuang region of China. It dates from the early Western Han Dynasty. These people were known for their very intense drumming in spiritual rituals and tribal meetings. Traditionally, chao gongs were used to clear the way for important officials and processions, much like a police siren today. Sometimes the number of strokes on the gong was used to indicate the seniority of the official. In this way, two officials meeting unexpectedly on the road would know before the meeting which of them should bow down before the other. 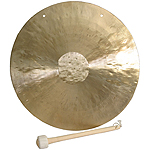 Wind gongs, which are also known as Feng or Lion Gongs, are flat bronze discs, with little fundamental pitch, heavy tuned overtones, and a long sustain.

Traditionally a wind gong is played with a large soft mallet, which gives it a roaring crash to match their name. They are known as wind gongs as, like the wind, their sound can range from soft and gentle to ferocious and powerful. Wind gongs are lathed on both sides and are medium to large in size, typically 38cm to 56cm although sizes as small as 17cm and as large as 120cm or more do exist. Some wind gongs, particularly those from Nepal, are ornately engraved. 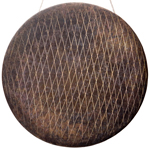 The Xiang Jia Gong (also known as a Shaman Gong) is a traditional Chinese gong with a long history. Traditionally it is played with a small stick which gives it a roaring crash.

Like many of the Chinese gongs, the Xiang Jia gong is used to accompanying music and to accentuate the dramatic moments in Chinese stage plays. These gongs have a deep rim and are usually engraved with a diamond pattern on the external surface. Xiang Jia gongs come in a range of sizes and the larger ones have an extensive overtone range with a powerful, mystic and pulsating sound.

Can't Find What You're Looking For?